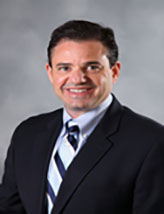 Dr. Matthew Mené, a native of Long Island, received his BS degree in Life Sciences at New York Institute of Technology in 1987 as part of a 7 year medical program. He received his Doctor of Osteopathy Degree from New York College of Osteopathic Medicine in 1990. He served a one year internship at Massapequa General Hospital (1990-1991), a one year of General Surgery Training at Philadelphia College of Osteopathic Medicine (1991-1992) and then completed a four year residency in Urologic Surgery at Philadelphia College of Osteopathic Medicine in 1996. During that time he earned a Master’s of Science in Urology for his work on Microwave Thermotherapy in the Treatment of Chronic Non-Bacterial Prostatitis. Dr. Mené has received several awards including, The Meade Johnson Research Grant, The Burroughs Welcome Research Award, The Golden Quill Award and The Merck and Co. Resident Achievement Award.

Half of his clinical time was spent at Albert Einstein Medical Center, a level one trauma center, where he received extensive training in urological trauma during his residency. He has been published several times in the urologic literature.

Dr. Matthew Mené is married and has two children. Recreationally, he enjoys the martial arts, where he is a Second Degree Black Belt in Hakkoryu Jiu-Jitsu and a Purple Belt in Brazilian Jiu-Jitsu.