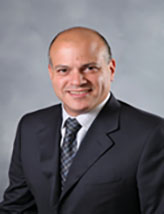 Upon graduation from medical school, he completed two years of general surgery training at Beth Israel Medical Center in New York where he subsequently completed his urological residency.

Since completing his residency, Dr. Luntz has been in private practice in Plainview, New York initially as a partner in North Shore Urological Consultants and subsequently as one of the founding members of Integrated Medical Professionals, PLLC. He received his board certification by the American Board of Urology in February, 2000 and was inducted as a fellow in the American College of Surgeons (FACS) shortly thereafter.

Dr. Luntz enjoys the practice of all aspects on general urology but has particular interests in minimally invasive therapies for kidney stone disease and minimally invasive therapies to alleviate the symptoms of prostatic enlargement (BPH). He enjoys continuously integrating new technologies into his daily practice and prides himself as an excellent communicator with his patients.

He is an active member of many medical organizations including the American Urological Association, the Medical Society of the State of New York and the American College of Surgeons in addition to many others.